Hello, my name is Brian, and I am here on behalf of your North East Fife SNP. Can I ask you a few questions?”

Brian Garrido repeated that introduction for five weeks while canvassing door-to-door in Scotland last spring. He was interning abroad during Scottish parliamentary elections, where he had a front row seat leading up to June’s historic Brexit vote. It was a global experience for which he was well prepared, thanks to his passion for liberal arts education.

From California to Iowa

Garrido (philosophy and economics, ‘17) was the first student from his all-boys Catholic school in California to attend Iowa State. Recruited by ISU’s Honors program, it only took one campus visit to fall in love.

“I had never pictured Iowa as a destination, but I love it. For me, the academic rigor was very important, and the Honors program was a way to make a big university seem smaller.”

Now a senior, Garrido has taken on leadership roles in the Honors program, served as a philosophy department teaching assistant, served in student government and even performed stand-up comedy through ISU’s Comedy College. 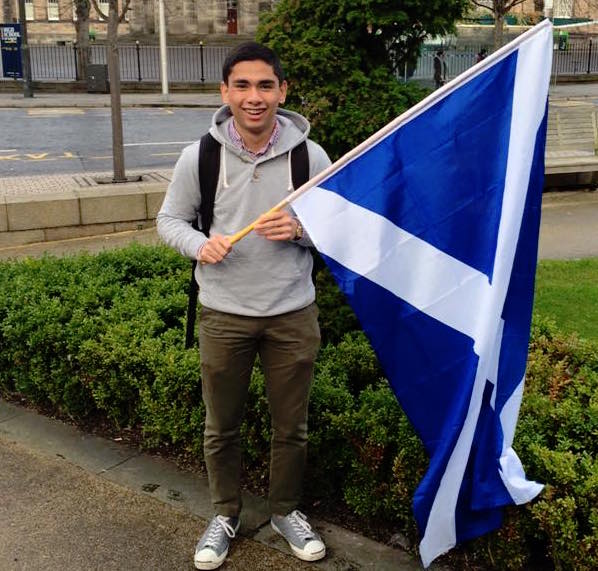 Garrido learned about the University of Edinburgh’s ten-week Parliamentary internship program through a tip from LAS Career Services.

“I had just read ‘Stress Test’ by Timothy Geithner and I was convinced I was going to work for the Federal Reserve because I love central banking theory,” he recalled. “I thought, ‘What a great way to get experience at a government level in another country.’”

Garrido was assigned as an intern to MSP Roderick Campbell of the Scottish National Party, who represented the North East Fife constituency, which includes St. Andrews.

“On my first day, I had just finished shuffling my papers in my office when my MSP walked in and said, ‘I have a debate next week.’ He said the topic was environmental protection, a subject I know nothing about, and that I would be in charge of debate prep.”

“On my first day, I had just finished shuffling my papers in my office when my MSP walked in and said, ‘I have a debate next week.’ . . . and that I would be in charge of debate prep.”

Cue a week of late-night research.

Garrido read legislation line by line and reviewed a report on proposed fracking in Scotland. He noticed one of the authors was the chairman of a large oil and gas special interest group, a granular detail his MSP brought up during the debate.

“Getting to see that debate was really cool,” Garrido said. “It’s not like America where it is a primetime production with makeup people and TV cameras. Whereas American politics seems like a very macro exercise, Scotland is very personal. It was just a group of 30 people.”

Because it was an election year, Garrido spent the last five weeks of his internship campaigning on issues such as higher education access and socio-economic equality. His MSP eventually lost the election in a tight race, but the experience taught Garrido to read past a headline and reminded him why global learning is critical.

“When you are in the United States, you often view the world through a very American-centric lens,” Garrido said. “When you step outside that bubble, even though I am retaining my identity as an American, hearing other people’s perspective for questions is very illuminating. It reshapes your own behavior and makes you ask, ‘Why is your way primary in your mind? Is it better, is it worse or is it just different?’”

Garrido was in Scotland for discussions leading up to Brexit. Since his MSP was on the European Affairs committee, Garrido attended weekly meetings with the Norwegian, Swiss and Irish ambassadors to the UK and was privy to discussions regarding the Euro, free movement of persons and access to the single market.

A series of fortunate surprises

This summer, Garrido switched gears from parliamentary politics to video gaming. He was hired as a demand forecasting intern on Best Buy’s video game team in Minneapolis, helping create prediction models to show which characteristics of popular games like Fallout 4 or Madden can boost sales units.

He accepted a post-graduation position as a demand forecast analyst with Best Buy Corporation, and will be moving to Minnesota next June.

“My whole college experience has been nothing like I anticipated. It has all been a series of fortunate surprises."

“My whole college experience has been nothing like I anticipated,” he said. “It has all been a series of fortunate surprises. It’s easy, especially in America, to spin a narrative for yourself where you are solely responsible for your success. I don’t think it is like that at all. I’ve had to work hard, but there have been so many people who have helped me along the way. I am really grateful the institution has provided me these opportunities.”